The most iconic C-sedan in India that’s now in its fifth generation. However, we have already entered the era of SUVs and C-sedan sales are being badly eaten up by these SUVs/crossovers. So, what does this 2021 Honda City petrol manual offer to lure people away from SUVs?

It’s unmistakably a Honda. The design of the 2021 Honda City is sharp but there’s an air of elegance to it because it does not go overboard with flashy elements like some similarly priced crossovers do.

The rear look, however, is heavily inspired by the latest BMW 3 Series. It looks great, but a little more originality is always appreciated.

In typical Honda City fashion, this fifth-generation model is also under tyred. You can already see our test car has upgraded tyres (Bridgestone Ecopia EP510 195/55 R16) and we highly recommend getting wider tyres on your City if you buy one for the sake of better looks and grip.

The 2021 Honda City comes with a minimalist cabin design that’s easy on the eye. However, the vertical air vents do look a bit dated in my honest opinion. Overall, it’s a clean design but it won’t make you go “wow” as the fourth-generation model did back in 2014.

The quality of materials here is pretty decent, but not great. But then, the Honda City never really had class-leading cabin materials. I do wish there were more soft-touch materials on the dashboard because all you get is a small patch of leather padding in the lower centre. Everything else is hard plastic.

The front seats are quite supportive, but the real party trick of the 2021 Honda City is its rear bench. The legroom at the back is phenomenal, and the 5’10” I still had enough space for my knees even with the front seat pushed all the way back.

The headroom is not all that great though. Anyone over 6 feet tall is recommended to visit a Honda showroom and check out the rear headroom himself because it can be tight.

The instrument cluster of the 2021 Honda City is part analogue and part digital. Even though the digital part is customisable, it’s more of a gimmick because navigation or lane assist camera (a super-useful feature on this top-end ZX trim) cannot be displayed here.

Also, weirdly enough, the fuel gauge is positioned too low, which means it is hidden behind the steering wheel when you drive! So you have to bend forward to check the fuel level.

The noise insulation inside the cabin at high speeds is underwhelming by modern car standards. So, wind and tyre noise does seep in, which means that the 2021 Honda City isn’t the most refined highway cruiser around.

The 8-inch infotainment system on the 2021 Honda City is pretty decent in isolation but is blown away by competing systems. The main culprit here is the sunlight legibility which is quite poor, which means the display isn’t clearly visible on a bright sunny day.

Segment standards such as Apple CarPlay and Android Auto are very much available here, and so is the connected car tech via which you can remotely unlock/lock your car. It also tracks your trips and gives you driving ratings. However, the ‘Honda Connect’ companion app is slow and there’s no geofencing option here either.

On paper, this 1.5-litre i-VTEC petrol unit sounds quite familiar to that found on the 3rd and 4th-generation cars, but it’s an all-new DOHC unit with 121hp of power and 145Nm of torque.

The refinement levels of this motor are pristine so you’d never complain about engine clatter.

This naturally aspirated engine’s red lines at around 7,000rpm which is total overkill for this kind of a car, but hey, it’s fun! The engine noise at high-revs is quite pleasing too. In ideal conditions, the 2021 Honda City would easily do 0-100km/h in under 11 seconds.

However, the flip side is that the mid-range is quite flat, so be prepared to downshift at low speeds more than you’d like. This car cannot match the in-gear acceleration of its turbo-petrol rivals.

The 6-speed gearbox on this Honda City petrol manual is a joy to use with precise shifts. The clutch is also short-throw which adds to the pleasant driving experience.

The 2021 Honda City’s fuel economy is pretty impressive. I managed to get around 16.7km/l on a ~250km trip despite being not easy on the gas pedal, now that’s impressive for a petrol C-sedan! However, while driving in the city, expect around 11-12km/l.

The ride is one of the highs of the City fifth-generation. It is very absorbent so it filters out most imperfections of our bad Indian roads quite gracefully.

That being said, on sharp speed breakers, you will surely hear a loud ‘thud’ inside the cabin.

2021 Honda City’s ground clearance stands at 165mm (unladen) which is pretty good for a C-sedan. So, this car will not scrape its belly until and unless the pothole is disturbingly deep.

The handling, yet again, is pretty good on this car. The steering is quite direct with a decent feel and a nice weight to it. It’s no sports sedan by any means, but its driving dynamics are quite impressive in this era of top-heavy crossovers.

The grip levels on your test car were pretty great thanks to the upgraded tyres. Again, upgrading the narrow stock tyres is quite essential on this car if you plan to push it hard.

So there you have it! The fifth-generation 2021 Honda City petrol manual may not be the default Rs 10-17 lakh family car anymore because that role is now better fulfilled by the more practical crossovers.

But, the City still has its charm. It will appeal to those who want a fun driving sedan, as well as to those who are chauffeured around a lot because that rear seat is a really nice place to be in.

Then, over its last five generations, the Honda City has made a reputation for being long-lasting and quite easy to maintain. Try putting a price on that! 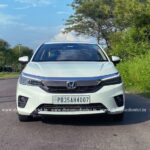 Here are the 5 heaviest motorcycles in 2022