A cult motorcycle reborn. Granted, it’s no longer owned by the original Czech Republic-based company, but its new owner (Mahindra-owned Classic Legends) has done its best to retain the iconic vibe of the original motorcycle.

Watch our video review of the Jawa below: 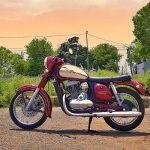