Royal Enfield’s most powerful and polished motorcycle yet. 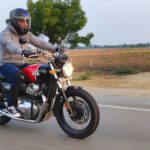