Samsung’s Rs 1 lakh+ smartphone that’s loaded with all the features you can think of. But this is the Exynos 990 SoC-powered version which raises a lot of questions.

Check out the camera samples from the Galaxy Note 20 Ultra below: 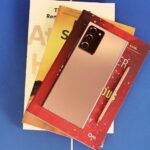 Samsung A53 with Exynos 1280 SoC launched in India